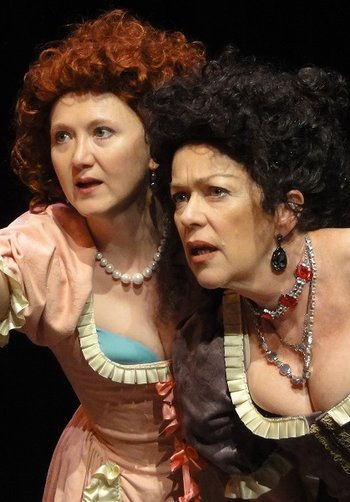 What is your favourite swear word?
JB – “Fuck-me-sideways”, it has such a lovely rhythm.
CQ – “Fuck-a-duck”, I’ve always been a fan of rhymes.

What is love?
JB – Wanting the best for someone; wanting them to be happy; putting yourself second, or third…
CQ – Freedom to be who you really are, to show every strength and weakness to another person and be accepted unconditionally.

What was the last show you saw, and how many stars do you give it?
JB – Lady Rizo in the Spiegeltent at that the Sydney Festival. She was fabulous! Four stars.
CQ – In January, I saw Grounded by George Brant, off-Broadway in New York City. Four stars. Wonderful play, brilliant writing.

Is your new show going to be any good?
JB – Come and see it and decide for yourself!
CQ – Absolutely. We would accept nothing less! It’s a real pleasure and luxury, really, to produce a new play twice in a year on two sides of the globe! As both playwrights and actors, we have freedom to refine the show; subtract and add things to fit the new space and the new country!