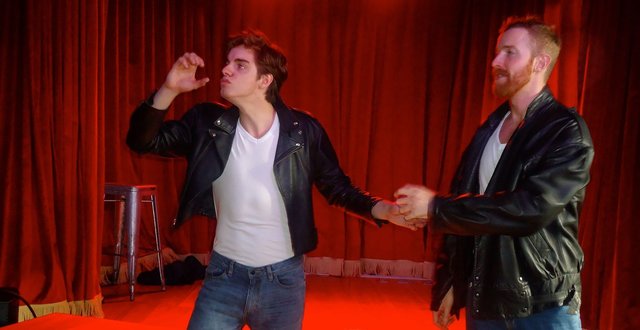 Theatre review
American playwright and actor David Drake’s 1994 one-man play is revived to coincide with the Sydney Gay & Lesbian Mardi Gras 2014 season. This time, Australian director Kynan Francis casts two actors, makes several updates to the script, and chooses a cabaret style venue to stage a radical re-telling of a piece of radical writing. Drake’s work from the post-ACT UP era was fresh and optimistic, arriving at a time when the shock of the AIDS epidemic had begun to subside, and communities were galvanised and empowered. A new gay identity had emerged, characterised by a buoyancy that had previously remained elusive. The Night Larry Kramer Kissed Me is an important work that represents this transformation. It remembers the horrors of a time of closeted secrecy and overt persecution, but articulates a vision of the future of equality and emancipation.

Ben Hudson is the more sure footed of both actors. He exhibits a close affiliation with the themes of the work, with a performance that is stirringly passionate and authentic. There is no question that Hudson would have been able to carry the show on his own, but Francis’ decision to partner him up is not an unwise one. While James Wright is less experienced, he holds his own. Like a young brother following closely behind, he completes the picture, and adds more to the production that is immediately evident. Both are brave yet vulnerable, and both understand the weightiness of the material they have taken on. There is a lot of careful reverence and sensitivity in this production, giving it an uplifting and beautiful spirituality.

Francis’ direction is deep and meaningful. His thorough familiarity with the script and its contexts ensures that every scene, moment and nuance is depicted with emotional accuracy and poignancy, and with political impact. The use of two actors effectively portrays the bonds between gay men, as brothers, lovers and compatriots. Some of this work is very moving. There is also technical brilliance on show, particularly with the performance of an extended section set against music. For a production of such small scale, it is surprisingly, and impressively, well rehearsed.

In 1994, the idea that all adults will one day be able to marry equally in the eyes of the law was hard to imagine. Our battles today might feel arduous and frustrating, but The Night Larry Kramer Kissed Me shows just how far our society has progressed. The play ends in the year 2020, when Oklahoma becomes the final USA state to legalise same-sex marriage. We are now 6 years away from that fictitious moment, and things seem altogether more hopeful and brighter than ever before.