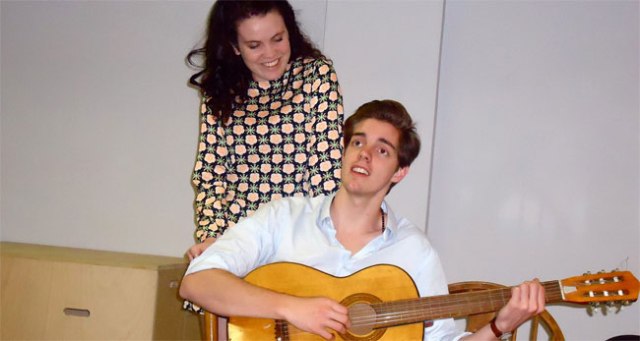 Theatre review
Written by Leonard Gershe in 1969, Butterflies Are Free premiered at virtually the same time as the legendary Woodstock Festival. The work discusses notions of freedom at a time when America was in the depths of the Vietnam War, and when the hippie subculture was at its peak. 44 years on, the resonances in Gershe’s script remain strong, and its story still strikes a chord with contemporary audiences.

Les Solomon’s revival of the play is slightly referential of the 60s, but design elements do not explore the retro aspect too deeply. Instead, Solomon focuses our attention on character development and the themes inherent in the writing. His direction of the piece is confident and passionate. We are treated to perfectly paced comedy, as well as an earnest approach to the deeper and more philosophical sections of the text.

Quality of acting is consistently strong. Emily Kennedy’s portrayal of a free spirit is delightful, and she captivates by shading her character with glimpses of a sombre interior. Her balance of light and dark grounds the show in a space of warmth and truthfulness, and establishes an intimate sense of identification with the audience. Cheryl Ward plays Mrs Baker, the “mother”, bringing a comic quality that is enjoyable yet subtle. Ward’s performance is measured and sensitive, creating probably the most convincing character in the show. It is noteworthy however, that the final quarter of the play seems slightly rushed. The comedy eventually gives way to a fairly serious conclusion packed with meaning and pathos, but the actors seem to remain at the speed of the earlier scenes.

The theme of freedom is one that absolutely everyone can relate to. In Butterflies Are Free, we are presented with a beautiful story and sublime, deeply moving words. This production allows us to savour those words as delivered by a group of impassioned players, and provides an opportunity for its audience to reflect upon the freedoms that exist in our lives and also those that are sadly absent.