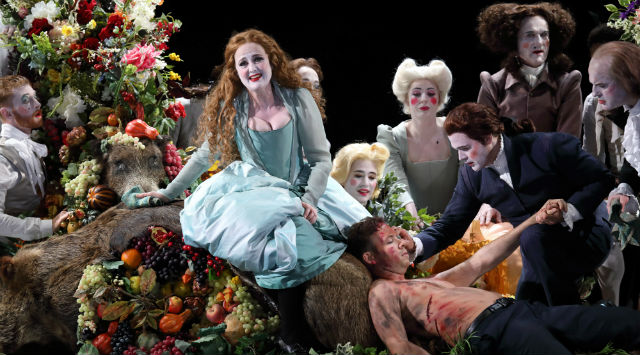 Theatre review
Stories of narcissism are more relevant than ever. In our age of omnipresent cameras and selfie-fueled social media, we are made to look at our personal selves more intensely than ever before, with no belief system powerful enough to convince us of any detrimental effects that would come from this unnaturally high level of self-obsession. We are all kings and queens, in our own minds at least, always placing the preponderant I at the centre of our universes, rarely able to conceive of anything greater, beyond the immediate and the ego.

Saul loses his mind, when he thinks his kingship threatened by David, a younger, better version of himself, who had become the nation’s darling after slaying the giant Philistine Goliath. Seeing his subjects, and his children, becoming thus enamoured, is completely devastating to Saul, who proceeds to unravel, in a series of self-destructive manoeuvres that take him to his dramatic ruin. It is a highly moralistic tale, one that upholds a particular notion of purity, and that abominates vanity, but Saul‘s preachiness takes on new resonance in our advanced evolutionary state of self-interest, made even more pertinent by Barrie Kosky’s characteristically heretical direction.

The show (an English production) is lavish, lush and at times, scandalously lascivious. The approach can be seen as ironic; exposing a gay affair between David and the prince Jonathan, or having Saul suck on a witch’s nipple, then smothering himself in the bad woman’s milk. Costume and set designer Katrin Lea Tag, along with lighting doyen Joachim Klein provide thrilling imagery so decadent (we gasp when the curtains rise), that one is prevented from interpreting any of Handel’s religious instruction too literally. Instead, we luxuriate in the extravagance of it all, and let the morals be subjugated by the far more engaging, and sonorous beauty of the production’s remarkable artistry.

The enthralling Christopher Purves is a commanding Saul, his voice and charisma in constant competition for our affections. Mary Bevan and Taryn Fiebig are both impressive sopranos, who bring surprising authenticity and tension to their characterisations. Most memorable is perhaps the company of fifty from the State Opera Chorus, who overcome acoustic limitations of the auditorium, for a collective presence full of power and remarkable conviction.

There are sections in the show that are purposefully minimal in approach, but those require a standard of performance that is not always delivered by the cast. Although we alternate between engrossment and disinterestedness over its duration, Kosky’s Saul is unforgettable. The fierce sense of adventure in every one of its bold, inventive and playful expressions, demonstrates the brilliance that can come out of creative genius when met with corresponding resources. We have the talent and money here, but how we can make them converge remains an Australian predicament, on an operatic scale.

#coronafashion #fashionfridays #highfashionathome #formalfridays #coronahighfashion #cheerupcouldbeworse
#coronafashion #fashionfridays #highfashionathome #formalfridays #coronahighfashion #hanginginthere
This #transdayofvisibility I pay tribute to the late #CarmenRupe a truly iconic figure. She lived a street away from me, when I was in Surry Hills around 2000. Always gloriously dressed, always smiling and always kind. I learned that simply living your best life in the most loving way, is sometimes the biggest, most audacious political statement.
#coronafashion #fashionfridays #highfashionathome thank you @leticiainescacerescapello, tagging @apocalypseportraits
This is a portrait of me, by my niece. It's true I'm both a unicorn and a wedding cake ❤
@mrbenjaminlaw's play #torchtheplace is in my hands, via @bookshopdarlo. I don't know if this is me spoofing @michelle.lim.davidson on the book cover, or is she making fun of me in that photo with that extra pose ❤ (3 hours hair/makeup just for the socials, is very 2020)
#nowspinning #AnitaMui #梅艷芳 a cover of #Madonna's #IntoTheGroove from the #1985 album #壊女孩. Asian music, especially #cantopop was undergoing intense colonisation at the time. We wanted Western pop sounds, but before Chinese songwriters could adapt to the market, record companies had to make lots of covers to cater to demand. Only 2 original compositions in this #LP, by a legendary artist gone too soon 💔 #suzysdiscs
#nowspinning a "new" #cantopop #RemixEP from #SandyLam #林忆莲, just 4 tracks from the mid 90s, an era when everything was only released on CD, so it's great to hear these on #vinyl for the first time. Reissues targetting #GenX consumers are big business. We struggled to find $15 back in the day to buy an album, but now think nothing of forking out $80 for just 4 songs. This disc feels worthwhile though, it's really high quality in every way. Except they've used a photo from the mid 80s, which is annoyingly incoherent. If you can hear the song playing, its title is #Determination. If you can't hear anything, it's because the music rights owner has muted it, which is stupid cos I'm like making an ad for them right here. #suzysdiscs
I've just emailed 4 theatre companies to tell them I'm regretfully not coming to see this week's openings. After thinking hard for 48 hours, I've decided that Suzy Goes See will be shutting up shop... for a bit, for the foreseeable future, for as long as is necessary. The government implies that crowds less than 500 are ok, but also recommends social distancing. I don't know how you can make sense of this, when you're sitting shoulder to shoulder with 200 people, but clearly you have to decide this for yourself for now, before stricter regulations are applied. Also, I'd like to point out that it may be 200 people one night, but after consecutive evenings, we're talking exposure to thousands in just a few weeks. Without Suzy Goes See, I may have to live a passionless existence for a while, which is scary to think about, but like many working in the arts, our need to innovate and create will simply manifest in different ways. Time will tell. Take care, of yourself, and more importantly, of others. There are people all around you who are more vulnerable than you, and they need your vigilance. Do the best you can for one another. I love you, and I'll see you on all the socials 24/7 ❤
5 eliza st 107 projects 2013 2014 2015 2016 2017 2018 2019 2020 atyp bakehouse theatre company bell shakespeare belvoir belvoir 25a blood moon theatre bondi feast bondi pavilion theatre brevity theatre cabaret carriageworks comedy dance darlinghurst theatre co drama emu productions ensemble theatre erskineville town hall eternity playhouse griffin theatre co hayes theatre co jackrabbit theatre kings cross hotel kings cross theatre king street theatre mad march hare mardi gras 2014 montague basement musical new theatre nida parade theatres old 505 theatre old fitzroy theatre outhouse theatre co pact performance art play red line productions review roslyn packer theatre sbw stables theatre seymour-centre siren theatre co sport for jove subtlenuance sydney sydney festival sydney fringe 2013 sydney fringe 2014 sydney fringe 2015 sydney fringe 2016 sydney independent theatre company sydney lyric theatre sydney opera house sydney theatre company sydney university dramatic society tamarama rock surfers TAP Gallery theatre the depot theatre the factory theatre the genesian theatre university of sydney walsh bay wharf theatres