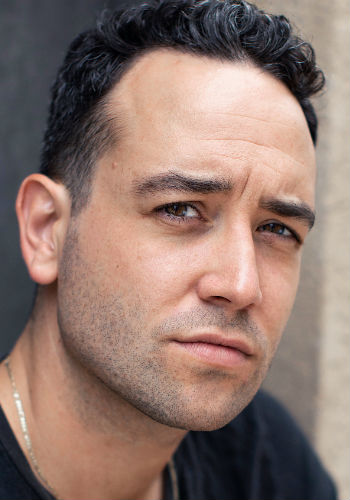 Jennifer Rani: Tell me about a work of art you’ve experienced, of any art form, that changed you in some way.
Tel Benjamin: Lord, there are so many but three jump out as having had particularly profound effects on my life. Jim Carrey’s seminal 1994 classic The Mask was the first film I watched (on repeat) that triggered the realisation that being an actor was an actual occupation and you could do it for a living. I used to do a bunch of the musical numbers and scenes from that film and others at the bus stop with my mum or dad and it was kind of like ‘Damn, you can do this for work? Why isn’t everyone doing this?’. Steppenwolf’s 2010 production of August, Osage County at STC completely blew my mind. It raised the bar immensely for my expectations of what theatre could be and got me thinking more critically about stage craft than I had in the past. I still remember how I felt leaving that theatre. Finally, Cormac McCarthy’s short novel Child Of God opened me up to how prose can have a musical quality and rhythm and how line breaks, punctuation and breaking the rules of those conventions can elicit an emotional response. I try to remember that in any prose style writing I do for film treatments or the like. Blood Meridian is also a must read. You asked for one, I gave you three, I’m sorry!

The play’s title is Extinction Of A Learned Response. What is a learned response you’ve developed at some time in your life that would save you in an apocalypse?
Okay. Are we talking zombies? Or just a regular old Nuclear winter? If it’s zombies, you definitely want me in your colony because I’ve read Max Brooks’ Zombie Survival Guide. Did you know, one of the most important items to have in a zombie apocalypse is ear plugs, because the incessant moaning from the undead can drive you mad? I did. Cos I read the book. But reading a book isn’t really a learned response is it. I’m a pretty good mediator and have some decent leadership skills so I could probably keep morale up and stop the group from eating each other. No promises.

Describe a creative work you haven’t yet made that is closest to your heart.
I’ve had quite a colourful upbringing, growing up in housing commissions with a rich close family history of addiction and crime. There’s a project I’m usually thinking about and often come back to that delves into and explores that world. It’s still very early development but it’s either an hour long format crime drama series or a feature film. I think it’s set in the inner west of Sydney during the heroin boom of the 90s, probably in and around a housing commission. Maybe spans to Cabramatta and involves a group of young teens who find a gun and don’t know what to do with it? I’ll make it one day. Get me on the hotline bling, SBS!

So you’re an actor, award winning screenwriter and director. Following a creative path can be a hard life to navigate, what keeps you coming back to it and do you ever lose faith?
It can be tricky right? This career is a vocation for me, I don’t really consider a life without it. I know that might sound a bit, whatever, but you really need to need to be an actor because it requires immense commitment and can be, as you say, hard to navigate and quite exhausting. I read a couple of years ago that T.S Elliot said “For us, there is only the trying. The rest is not our business”. That resonated because, for me, the lack of control in an actor’s career is the hardest part. Your path is often at the behest of casting directors, producers etc which can leave you feeling kind of helpless. All you can really control is how hard you work, so that’s what I come back to. That’s part of why I started writing and directing film, I think there’s more autonomy in those pursuits. I’m also reminded of why I do it almost every time I’m in a rehearsal room or on set. After our first reading of Extinction I kind of floated home and couldn’t sleep, I was giddy. Not much else does that for me.

Your character in the play could be described as having questionable ethics. If you were sent to jail, what crime would it be for?
Classic Marlow, passing the buck. You’re in on these questionable ethics too! It would be a crime of passion, for sure. I like to think it would be a Robin Hood, steal from the rich and give to the poor type situation. Or like, an overexuberant romantic gesture. Egging bigoted far right-wing politicians feels like a crime worth going to jail for to be honest.

Tel Benjamin: Um, so your Showcast says you are ‘‘Highly skilled in Military culture including: weapons handling; combat training; marching drill.’ Can you please explain how you came to gain those very specific set of skills and if you could utilize them in any action franchise, which would it be?
True! Secret past revealed! I was in the Army and am a highly trained military operative: think SAS Who Dares Wins– lots of running and shouting and “breaking through pain barriers”. It was more a social experiment; it was such a hidden world. I mean, what did the Australian military really do? Where was it like for women? As a young woman of colour navigating a specific, isolated and predominantly male environment was… challenging. Great fodder for character study though and I reckon I’d be right at home in Terminator, Mad Max or Indiana Jones. You’d definitely want me on your team if the world were ending.

Extinction deals with memories and the way they shape your current place in the world. Is there a specific memory from your life that you remember being the catalyst for wanting to be an actor and work in the arts?
I distinctly remember stepping into the streets of Singapore, my mother’s birthplace, for the first time. The smells, the colours the noise and languages, there was something deeply familiar and comforting about it. It felt like home, I’d never had that sort of visceral experience with Australia. So that kinda blew my mind. It was such a relief knowing those ethnic markers were intrinsic to me, even though they weren’t necessarily prevalent during upbringing. It wasn’t the catalyst for wanting to be an actor but it was pivotal to me understanding that story was a way in which I could unravel that experience, that I could create a narrative that I hadn’t previously felt a participant in. The question of whose and what stories we tell, and what they say about our national psyche, underlies this.

You’re a first generation Australian who grew up in Tasmania. Is there a story or aspect of your culture and background that you’re interested in creating work from and exploring as an artist?
Absolutely. My experience growing up in a regional Australian city was like a ‘101’ in cultural confusion – I was one of only two Asian kids at my school! Theatre and the arts opened worlds of possibilities that weren’t available in my everyday, especially the diversity on the art and creative I saw when living overseas. The potential impact of the arts, that it can shift something seismic in you and create space for you is a driving motivation for me. Don’t write off regional cities. Take work there. Support regional artists. Seek them out. Australian stories exist all over the country. Currently I’m developing my maternal ancestral history, traversing South East Asia, England and Wales to Tassie. I hope that this can help deepen my understanding of my heritage and what ‘belonging’ and ‘homeland’ actually look like to me. That experience in Singapore particularly was a stimulant to connecting with my cultures as a first-generation Australian.

How weird are auditions! Got any pre audition rituals or sage advice you’ve been given to keep you focused and in a good headspace?
Weird, but they can also be warm and creative. Nah man, just be prepared and chill. There is so much I can’t control so focusing on my work and managing nerves and expectations is key. Be present, be open and trust yourself – I’ve discovered excellent things in the room by being flexible in my approach. It’s all practice for the right gig. Then chuck the script out.

If you could have dinner with anyone living or dead, who would it be and what would you eat?
Mate. This question. Um. Monty Python. I’d make us all toasted cheese and caramelised leek sandwiches and I’d react all the scenes from all the films and we’d have so many laughs. And so many sandwiches.

Tel Benjamin and Jennifer Rani can be seen in Extinction Of The Learned Response, by Emme Hoy.
Dates: 7 – 25 May, 2019
Venue: Belvoir St Theatre