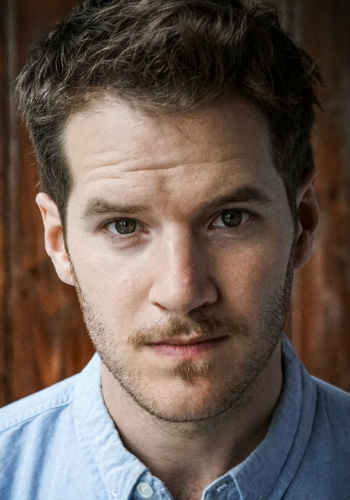 Branden Christine: You’ve played an Irish character before, was that a blessing or a curse in developing your character for Cyprus Avenue?
It’s a little from column A and a little from column B! Last year I had the chance to play Padraig in a production of The Lieutenant Of Inishmore; considering the tonal similarities between David Ireland and Martin McDonagh, slipping back into that world was an absolute blessing; the rebellion, the desperation and ideology-through-paramilitary, it’s all been very enjoyable to revisit. On the other hand, wrangling the dialect has been a battle. Slim is a die-hard northern unionist; unlearning the lilting, lyrical southern and wrapping my mind around the more brash and broad northern has been a fantastic challenge.

Were any unexpected political or social aspects of Cyprus Avenue revealed during the rehearsal process?
I’m surprised by how broadly and wholeheartedly I’ve always accepted the story of the Republican Irish as the total Irish meta-narrative. That is to say, when I think of Irish cultural identity, sure it may conjure all the tropes and clichés associated with the Emerald Isle, but part and parcel of those ideas are those of ‘the freedom fighter’ and ‘liberation armies’, the rebel songs and the glory of fighting the unfair oppression of northern occupation. I’d never bent an ear in any significant way to the perspective of the Unionists. I’d always subconsciously cast them as the villains. This play has given me a terrific excuse to really dive into the finer motivations of this ‘other side’ and it has been most illuminating.
Slim actually explores this idea of this narrative ownership on stage and it is absolutely one of my favourite moments in the play.

This play employs a unique balance of absurdity, tragedy, and comedy. Did any of these themes in particular attract you to this play?
All three! David Ireland has written play that manages to intertwine all three together so closely, and each scene is written with such agility that more often than not I find myself toeing the line between two or more major thematic elements. And this is the mark of a brilliantly written play! Each moment reflecting and refracting through other moments. The lines that are the funniest are often the most heartbreaking, the situations that are the most absurd are the most revealing.

I found the need for both objectivity and emotional investment from my character quite challenging. Did any juxtaposing traits come up for your character?
Without going too deep into the philosophy of Slim, I’m compelled by his particular hierarchy of values, which are as rigid and as furious as they are convenient. A violent and volatile scholar of film and philosophy, with a romantic nostalgia for a truly terrible time in his country’s history he never had the opportunity to experience.

During the arduous rehearsal process of Cyprus, did you rely on any specific food groups to get you through?
Fuji apples, almonds, black tea!

While preparing for the role, you had the opportunity to spend time with a forensic psychologist. Can you describe one or some of the more surprising/insightful takeaways?
Getting the inside scoop from a forensic psychologist was fascinating for many reasons. For one thing I was quickly made aware of all my preconceived notions based on watching too much Criminal Minds and Law And Order (my personal fave) and thought being judicious and scientific when portraying a psychologist would be a way in. I came to find out, it’s those things but so much more. A criminal psychologist’s job is also about building a relationship, being open to possibilities, and staying curious — a kind of empath who takes on other people’s feelings and energy, while also being still objective and scientific. This insight gave me a nuanced motivation with which to shape my character.

You play the character of Bridget, a psychiatrist tasked with treating the play’s prejudiced protagonist Eric. Are there any particular qualities that you recognise in Bridget that you would like to integrate into your own life?
Totally! Bridget has a kind of courageousness that I would love to be able to embrace in my own life. To do the kind of work she does, working with extreme forms of pathology, she must be self-assured enough to let go of ego, i.e., her own beliefs in order to take the plunge and walk hand in hand with Eric down the path of recovery. Although she’s just as fallible as any other character, and is not always successful, the effort alone requires an enormous amount of confidence to face the dark sides of humanity and ask questions that I personally would find too confronting.

What was the most surprising thing you learned about the conflict in the Northern Ireland while exploring and researching for this production?
I went in somewhat ignorant about the conflict in Northern Ireland and had a bit of a learning curve in rehearsal. What primarily astounded me in the process, despite the particulars of this story, is the universality and insidious toxicity of nationalism, prejudice, and ideology. I’m from the U.S. so these themes are very present at the moment and hugely relevant given our current political leadership or lack thereof in the States and many parts of the world.

What are some of the best experiences you’ve had in a theatre over the last twelve months?
I haven’t been to many shows lately, but I have a good excuse, a new baby and the being in the cosiness of motherhood. So, I’m going to be cheeky and say that working with the wonderful creative team on Cyprus Avenue is the best theatre experience I’ve had in years, let alone the last twelve months.

Favourite line from the show?
“How can a baby have a beard?”