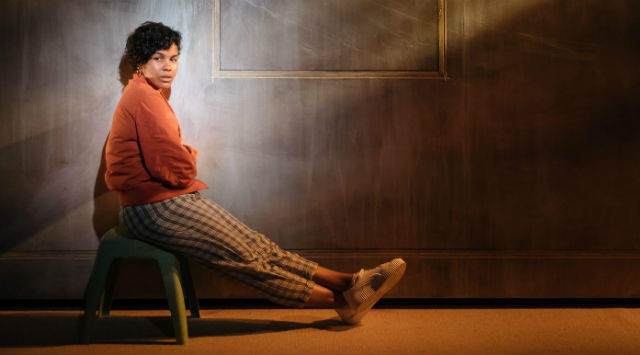 Theatre review
A regular family wakes up to another ordinary day, getting ready for their midweek routine. We soon discover that things do not go as planned, when the police appear on their doorstep, delivering news of catastrophic proportions. debbie tucker green’s random is about youth violence in metropolitan cities, a consequence of our incompetence as communities to provide adequate care and guidance. The playwright’s unique combination of slang, patois and poetry, represents a sublime reshaping of the English language, that emerges from the Caribbean migrant experience in England. Keen observations of contemporary life, are positioned alongside nuanced social critique, giving palpable voice to the black working class.

Actor Zahra Newman plays all the characters in this one-woman show, proving herself a force of nature, and a legitimate superstar of the Australian stage. With extraordinary talent and skill, Newman tells the story of random with exceptional dynamism, taking us from jubilation to the extremes of tragedy, for an experience full of complexity and sentimental enthralment. The multitude of voices, emotions and gestures that the actor is able to portray for each and every personality, are administered with an astounding fluency, as we watch her switch flawlessly between states of mind, whether these people appear for a breathtaking split-second or for several bewitching minutes. Newman is an unequivocal genius, and the theatrical magic she dispenses here, is simply divine.

Directed by Leticia Cáceres, the production is sharp, powerful, often awe-inspiring. Hilarious at the start, and later on, turned harrowing, every moment is captivating, fuelled by an urgent confidence, a vehement need to present the play, with all its sociological pertinence and aesthetic glory. Designed with commendable sophistication, the staging features lights by Rachel Burke and music by The Sweats, both restrained in approach but marvellously efficacious, for this brazenly empty space.

There will be some who wish to call the phenomenon universal, but to neglect the racial dimension of violence in random would be callous. We are all capable of heinous acts, but the circumstances around racial inequity must always be taken into account when trying to understand the social ills of any community. Poor outcomes should never be considered random or accidental, when it is clear that the cards are clearly stacked against some. To be blind to the colour of our neighbours, is to be wilfully ignorant of the challenges that they face. We all deserve the same rights and privileges, but to imagine that things are already equal, and to behave as though nobody is ever in need of additional support, is to perpetuate and fortify the devil’s work.