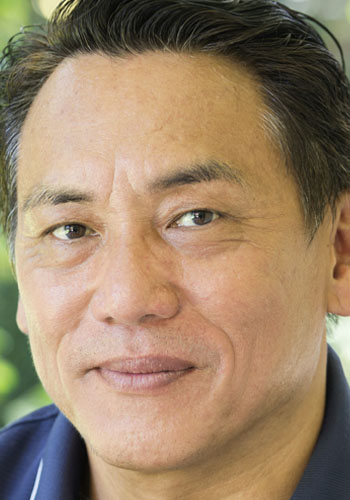 Shan-Ree Tan: So who’s Tony Goh, and how’d he come to be in a theatre in Marrickville with the rest of us?
Tony Goh: Tony is an Australian born Chinese. I was born in Brisbane, grew up in Marrickville, got married, lived in the US for 13 years, started a family – I have two young boys 15 and 13. I have returned to Marrickville through an odd journey and co-incidences. I am currently studying acting and was interested in doing a stage play. Over the past two decades, I dabbled in TV, commercials, and film – including two in the US. So, I have constantly re-inserted acting into my life, perhaps because I am always interested in the lives of others, how others live.

You play a character who’s a big fan of theatre in this play. What’re you a big fan of in real life in that way?
Definitely a fan of movies, but then again who isn’t? I was bitten by the acting bug really young, at age 16, when I went heard they were auditioning for the role of an Asian shopkeeper in a very shortlived TV series called “Arcade” shot in Cremorne shopping arcade. I couldn’t really turn my back away after that even though I never got the part. I’m also a fan of cooking and staying in shape.

We’ve got a pretty diverse cast for a Chekhov, I reckon. Do you feel particularly as an Asian face you’ve got more to prove as an actor? Or does it not really worry you? It worries me…
If I were to enter the entertainment business today, I would feel more pressure to prove myself. Sure there’s still pressure, it comes with the territory. But back in my day…god I sound old, there were fewer parts for Asians, mostly stereotyped roles. I think the Australians are now accustomed to seeing Asians as being well, just Aussies, so there’s little in the way of having to conform to some image. We can just be actors/characters/people. However, I also think there are more roles for Asians nowadays which means there’s a lot more opportunity to showcase the available talent. I think the pressure to prove as an Asian actor could stem from the fact that Asian culture is one of conformity. Conformity and creativity are at odds. It is those Asians or any migrant culture who best absorbs the available culture that will be able to grow and develop as both actors and members of society. I think the issue is one of broader acceptance. We’re lucky in Australia in some respects because we tend to focus on producing drama, which opens the way for dramatic roles, character based. Whereas when I cast my eyes to Hollywood, there tend to be more stereotyped Asian roles. The US is getting better sure with shows like “Fresh Off the boat” but those are few and far between as you’d be hard-pressed to see many Asian actors playing characters as opposed to caricatures.

You’re always a terrifically jovial presence in rehearsal. What have you enjoyed the most about director Anthony Skuse’s process?
I have enjoyed Anthony’s insight, creativity, and patience. He is a great communicator, as a result, you have a clear picture of what is expected of you and what he wants from the scene, the emotion. One of the questions he’s asked us, certainly me, is who is my character, and what do the people around the character mean to my character. Those are questions to shape my own thoughts and bring my own interpretation of the character, yet remain truthful. It is amazing what that has accomplished and the clarity it brings to the preparation process. I also enjoy the cast. We’re a mixed bunch and get along well. We know we have a job to do and we’re not assholes going about it.

What kind of role/project would you want to tackle next, if you had to make a total change from this gig?
A tough question. I won’t go into the personal side of my life, but let’s just say the last four years of my life have been a wild ride, an adventure if you will. I feel I am still trying to find my way in life. I would very much love to pursue further acting endeavours, perhaps as a regular on TV drama series – the typical lawyer, doctor, cop thriller comes to mind. I have long since given up on the dream of making a living in acting, so whatever morsel comes my way I am deeply grateful for.

Tony Goh: What are you enjoying about working in this play?
Shan-Ree Tan: Ah, everything. Even the challenges of rehearsing on a co-op schedule and all the technical
curveballs that come with any show. Working with Anthony has been brilliant – I’ve really gotten a lot out of his literate, rigorous approach to text and his direction, which is somehow both entirely intuitive yet absolutely precise, and demanding while also being really supportive – and he’s got a great sense of humour. Really enjoying soaking up the learning from our experienced and generous castmates and crew too: serious about the work without taking themselves seriously at all. Definitely feeling like I have to jog very very briskly to keep up, but same, I’m grateful for the chance I’ve got even to share a stage with these folks.

What do you see as the future of acting in a multi-cultural Australia?
Big question! I’m not equipped at all to make any informed predictions – but like you, I’d like to see the performing arts here get to a point similar to where the UK industry seems largely to have gotten to, where it’s largely unremarkable to see culturally diverse actors in almost any production. “Unremarkable” is probably the wrong word. What I mean is that I hope that we can work to make two things happen: one is that we get to an overall much, much better place with “any ethnicity” or colourblind casting where that’s appropriate, and the other is that the appetite for the kinds of Australian stories where an actor’s cultural or ethnic background is an active asset, and can be appropriately provocative, continues to increase. The challenges will be quite radically different for actors from different cultural backgrounds – Indigenous representation or Middle Eastern representation are good examples – so the solutions to perennial hurdles like stereotyping and tokenism will be different.

We’ve seen a quite a few trailblazing Asian arts and media personalities take stage here in recent years and it’s going to be really interesting to see that develop. I’m particularly interested in what’s going to happen in the conversation between media/arts representation reflective of folks like us who grew up in Sydney and are more Aussie than anything else – out in the Hills in my case and in Marrickville in yours – against the popular culture of the beachhead communities of the “new Asia” who are paying attention to a whole other vast entertainment industry. The cultural gulf there alone can be huge, I’m keen to see how it plays out. As far as our production goes: people may wonder why this particular diverse cast was chosen to portray a bunch of ostensible 19th century Russians, particularly with our wildly differing regionalisms, but I like that it adds a new musical range and quite a powerful meta element to it. The play is literally about trying to reinvent theatre in a social context, so I reckon it rewards the approach that Anthony’s taken.

What movie/theatre stars do you admire and why?
Too many, for too many different reasons. A few completely random names from things I’ve seen this year:
Blazey Best. Not reasonable for someone to be able to be that funny and musical while literally standing on her head in the Wharf Review this year. Rob Brydon/Steve Coogan/Michael Winterbottom, the collective team. The Trip was life-changing. Takeshi Kitano. Big fan of his consistent ability to find the darkest, driest laugh possible at everyone’s expense and that he keeps finding new ways to provoke. Kate Mulvany. That lady knows how to Shakespeare. Gary Oldman. He seems to know precisely where to set the dial for whatever movie he’s in. Taika Waititi. What a mad Kiwi wizard. Thanks to my girlfriend for forcing me to sit down to watch What We Do In The Shadows for the first time earlier this year. We’re also at a moment where creatives are using whatever recognition they have to take a stand and speak out on the critical social and political issues that are roiling us right now, even at massive professional and personal cost to themselves. That’s hugely admirable.

What do you think happened (to the characters) after this play?
Is it still possible to spoil the ending of a 120 year old classic? Chekhov’s got a very particular definition of “comedy” – things are just not going to work out well for most of them are they…? Your character, Shamraev, probably makes off all right – I like to think he basically gets left with the estate to do with as he likes. Your wife Polina might have convinced the good doctor Dorn to run off with her before then though. Masha: cirrhosis. Medvedenko: pneumonia, from all that walking through Russian snow.

What don’t your friends know about you, that only your closest, or longest time friends do?
All my vocal impressions of people are now actually just take offs of Rob Brydon doing far superior impressions of those people. To be fair, people work that out pretty fast.