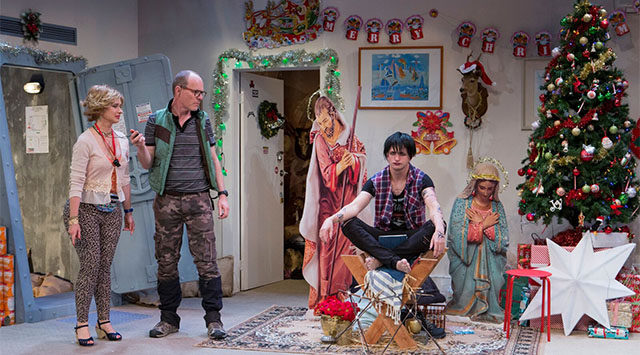 Theatre review
It is Christmas in the suburbs of Sydney, and the Lickfolds are freaking out, because of course, there is just so much to be done. In Silent Night by Mary Rachel Brown, we take a look at our behaviour during what is meant to be the most sacred time of the year. We may not be a religiously homogeneous nation, but the silly season of December insists that we all act at a surprising degree of uniformity.

Australians take Christmas seriously, but rarely for the right reasons. In the Lickfold household, an occasion for charity and goodwill is turned into an opportunity for exacerbated narcissism and magnified paranoia. Anne wants at all costs, to win her neighbourhood’s annual competition for the best decorated house and yard. Her husband Bill’s doomsday preparations are at fever pitch, fuelled by the incessant talk of diversity, in politically correct representations of Jesus’ birth on rooftops, and other places. Their son Rodney is determined to get in the way of everything; even at Christmas time, he refuses to share his parents’ attention with anyone, God included.

It is a moralistic tale, predictable in its messaging although imaginatively conceived. Clever ideas abound in Brown’s play, but they are not presented well. Its comedy is relentlessly laboured in the first half, and when things get serious later on, its dialogue turns confusing. Director Glynn Nicholas makes sure that we know when punchlines are delivered, but moments of genuine laughter are few and far between. There is no doubting the grace and spirit that motivate the creation of Silent Night, but intentions on their own are rarely insufficient.

Production design is competently rendered, as are performances from the cast of four. Energy and conviction are delivered in spades; we see the actors work hard, and their determination to keep us engaged is, to some extent, effective. Richard Sydenham impresses as Bill, animated and precise in his approach, able to communicate a hint of complexity that is absent from other characters.

It is true that Christmas makes our ugly sides more pronounced. When we compare our lives to the best of the Bible’s stories, we can only see beings contemptible and profane. All the wasteful decadence and hollow frivolity that inevitably take over our celebrations of that sacred dawn, expose our values to be no more than utterly dismal. We are not bad people, but when we are careless, there is little than can differentiate us from the scum of the earth.