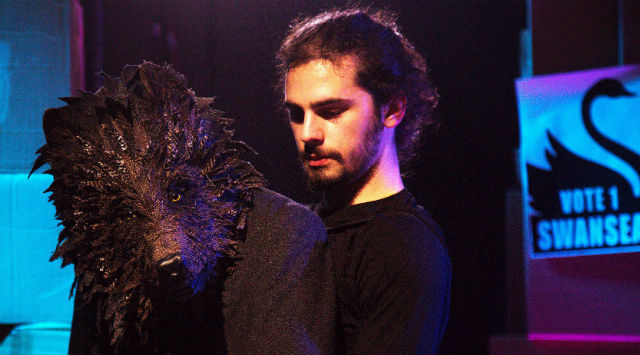 Theatre review
In Godface we find a familiar reflection of our scepticism and distrust of government and the adversarial political system. There is an accuracy to the way Robert den Engelsman and Murray Lambert’s writing represents our feelings about politicians and their operations, but its insights and perspectives on the subject are hardly unusual. It shares our disillusionment with all things political, featuring characters that need little introduction, for a simple tale of corruption and exploitation.

Scott Parker’s enthusiastic direction brings to the stage a liveliness that many will enjoy, using puppetry and techniques of commedia dell’arte to spark our imagination as it forms a commentary on the state of the world. Delightfully performed by a unified cast of actors, the production is memorable for its sense of variety, established by a keen interest in a non-naturalistic mode of expression. Sam Flack leaves a remarkable impression in a range of characters including the head of the New God Party, a wolf gangster and a pair of opinionated giraffes. The actor is vibrant and humorous, with excellent charisma that gives each of his transfigurations considerable appeal. Designer Aleisa Jelbart’s work on puppets, props and set is especially noteworthy, with an exceptional eye for detail and refinement that provides touches of stylistic elevation to the production.

At the 2013 elections, 739,872 informal votes were recorded. There is little hope to be found in Godface, for good reason, and we see clear as day, the alienation felt by many of our population. Modern democracy is deeply flawed, but remains the only system we deem acceptable. It is a conundrum that we learn to live with, and on occasions such as this weekend’s federal elections, we have no alternative but to indulge in a moment of delusion that the world might just be ready to make a change for the better.