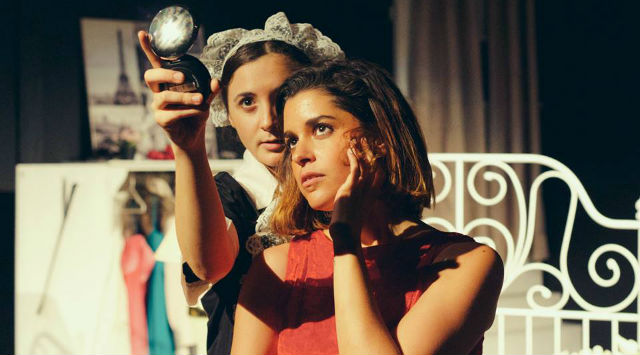 Theatre review
The women are suffering an acute case of cabin fever. They are maids who live and work in their employer’s home, cut off from the world, with only bitter resentment as company. Fuelling each other’s appetite for destruction, they go about their days imagining scenarios of retribution towards their Madame, a lady of leisure whose narcissism makes her increasingly unbearable to the weird sisters.

Jean Genet’s ideas in The Maids are provocative, but Bernard Frechtman’s translation, although poetic is not particularly theatrical. The language’s floridness does not lend itself easily as dialogue, and even though director Angelo Samolis ensures that meaning is conveyed in a broad sense, it is a challenge trying to find nuance in the text. We follow the plot, but are unable to explore its controversial concepts at much depth. The three actors are energetic and focussed, with an adventurous approach to physicality that provides buoyancy to the production. Design aspects are simple but thoughtful, with an appealing visual aesthetic achieved through a fairly minimal touch.

There is good work in how the show conveys emotions, but we receive little in terms of psychology. The women go on outlandish rambles without providing sufficient insight to hold our interest. The maids do not appear to have a hard life, but their jealousy has become overwhelming. Without resources or ability to withdraw themselves from their predicament, their journey becomes a downward spiral into disaster. People can create lemonade out of lemons, but we can also make the worst out of any situation. We observe the characters in the play make poor decisions, but also wonder how else they could have lived.