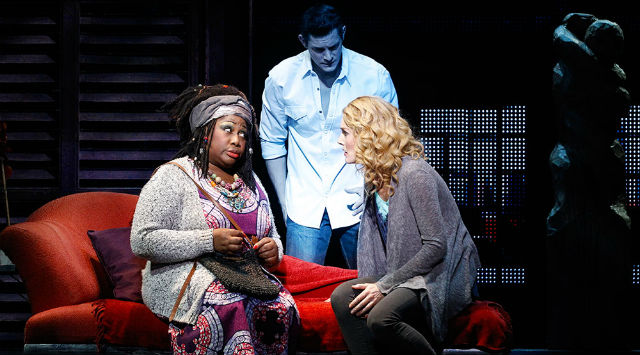 Theatre review
The 1990 film Ghost is remembered for its fantastical melodrama involving spirits, murderers, a psychic, and a pair of lovers with a penchant for ceramics. The 2011 musical version retains the very eventful narrative of its original, as well as an extravagant sentimentality that has become closely associated with Ghost. It is undoubtedly a cheesy operation, but no one on stage or in the audience pretends that it is anything otherwise. Its characters are two-dimensional, all singing formulaic showtunes, and the chorus makes sure that the very last row of nosebleeds would notice their every move, even though choreography is already terribly obvious.

There is no room for subtlety here, and the production calls for a certain amount of toughness on the part of its audience in order to stomach its garish approach on all fronts. It is paint by numbers Broadway style, but those predictable blueprints are established for a reason. Ghost provides entertainment, escape and amusement. It gives us moments where we suspend disbelief and reach for the most naive parts of our minds to indulge in all its saccharine wonder, as we gasp at its melange of levitating bodies, disappearing apparitions and actors walking through doors. We might find our intelligence insulted at certain points, but we are accepting of it, as evidenced by box office takings the world over for productions of this nature.

Accolades for Whoopi Goldberg’s film performance as the outlandish Oda Mae, including an Oscar, demonstrate our appetite for the brash and gaudy. The role is performed here by Wendy Mae Brown who does a close proximation of the very memorable hustler-turned-psychic. The delightful character is played by a spirited actor with an impressive voice who relishes every punchline and their accompanying laughter. The leads are much more subdued in tone. Rob Mills and Jemma Rix are excellent performers assigned big songs but nothing much else. Their singing is often spectacular, and both are easy on the eye, which makes them perfectly cast.

It is hard to be enthusiastic after the fact, when a show gives you everything that you had seen many times before, but there is no doubt that we find ourselves powerless and captivated by its tried and tested moments of musical theatre. Ghost provides a familiarity that many wish to revisit time and time again. It reduces us to a childlike stupor, and many would pay good money for that fleeting pleasure. It may not be a special work of art, but in comparison to everyday life, this is magic through and through.