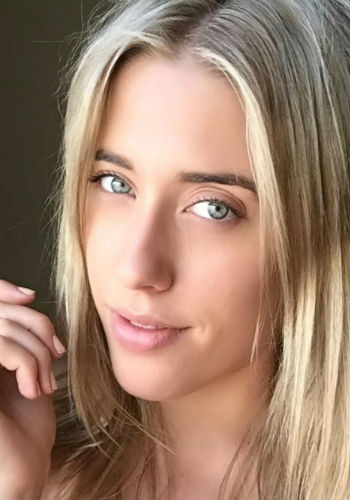 Tina Jackson: You’re a bit of a screen personality, what’s the difference between film and theatre acting?
Claudia Coy: For me, it’s all about the audience interaction, especially in comedy. When I’m performing for the camera I have no idea if I’m hitting the right comedic notes until the preview screening, whether as in theatre you’ll know straight away whether or not you’re playing up to your audience and subtly adjust your performance accordingly. For more intense scenes, film sets are safer places because you have time to get to the emotional place that you need to, but that’ll never compare to the fun you can have interacting with your audience live.

The character of Jenny, do you resonate with her at all?
I had a bit of a rough time empathising with Jenny in the first few read throughs. There are similarities in that we’re both young, blonde, students but unlike me, she finds it really difficult to stand up for herself and lets people continually underestimate her without feeling the need to prove them wrong. She’s stronger than she comes across but in the same respect she has a heart of gold so would rather keep the peace than address the real issue. The one thing that really resonated with me, was Jennys territorial nature – she’s happily engaged and planning a wedding but there’s still someone from her past that she considers ‘hers’ and seeing him with someone else completely shakes her world up. I had a very similar experience last year and so I hope that I deliver Jenny in a way that justifies her action.

How has it been revisiting the text and the character after a year?
There’s always a huge low that comes with finishing any production, so when I was asked to reprise my role I absolutely jumped at the opportunity. Having James reprise his role as my fiance meant that I had an immediate source of comfort and familiarity, but having two new actors in the cast brought a lot of new energy and perspective. I’ve found that Tina and Luke’s interpretations of Evelyn and Adam, has dramatically effected the way I perceive Jenny and her role in their friendship group and so my performance has evolved as well.

How do you prepare for roles?
When I auditioned for The Shape Of Things the first time around, a friend suggested I watch the film before I go in. I feel like the worst thing an actor can do is purposely base their own performance on someone else’s artistic choices. To prepare for an audition, I just sit down and get as familiar with the script that I can while thinking of key characteristics and ticks that make my character who they are. To prepare for the actual performance nights, I need to have at least 15 minutes by myself before we go, especially when the rest of the cast have become good friends – you almost need time to shake those friendships off so that you can see them as their characters and interact accordingly.

Claudia Coy: This is your first ‘straight’ piece, how different is it to say, a cabaret or musical?
Tina Jackson: Well, for me I’ve always found straight theatre less emotionally accessible – it’s so easy with musical theatre to let the music carry you away before you even delve any deeper to the characters or story. I find this kind of theatre much more intellectual. I go home from rehearsals mentally drained!

You lived in London for a couple of years. What’s the biggest difference to the industry here, and the industry there?
The industry over there is just SO BIG. There are more professional shows being performed at any given time than Australia could hope to produce in years. The fringe scene is also huge over there – there are plenty of fringe festivals and plenty of amazing fringe theatres constantly putting on new work. There also isn’t as much of a divide between “music theatre” and “straight actors” over there – here I’ve found if you come from a music theatre background it is very difficult to get a foot in the casting room for film and tv.

Do you have any dream roles? Regardless of gender and age?
I would love to play Maureen in Rent. Or Bruce Bogtrotter in Hairspray.

What’s your biggest fear as an actor?
I think it’s the same for everyone. Being able to make a sustainable living doing what we do is almost impossible and not being able to set yourself up for the future is pretty scary.

What are your thoughts on the vastly growing musical scene in Sydney?
It was pretty exciting to come back from London and see so much was going on. Companies like the Hayes and Squabbalogic are doing the most beautiful small productions and it’s nice to see hugely successful overseas shows like Matilda and The Book Of Mormon are finally coming here as well.

Claudia Coy and Tina Jackson will be appearing in The Shape Of Things by Neil Labute (part of Sydney Fringe 2015).
Dates: 15 – 20 September, 2015
Venue: Kings Cross Hotel