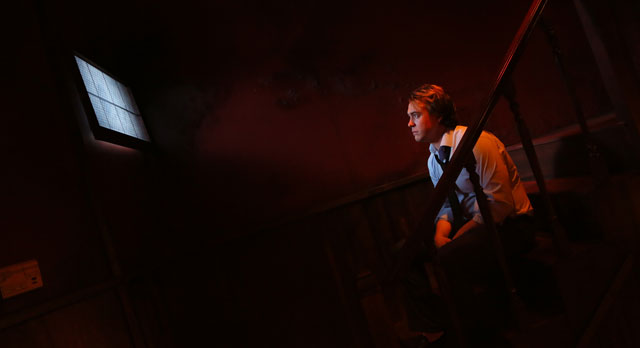 Theatre review
Marshall Napier’s very Hitchcockian Freak Winds has all the suspenseful intrigue, perverse humour and subversive eroticism that keeps an audience simultaneously repelled and seduced by its story. Unlike Hitchock, Napier’s work is of the twenty-first century, with much less censorial restrictions, so what we get is an update for the genre and style. It does not resort to gore and constant bloodletting, but it delivers thrills and creates tension with a rather more explicit incorporation of sex, murder and terror. Napier’s lines are quirky and cheekily controversial, and the structure of his play is unpredictable, with an edgy sense of danger at every turn.

Direction of the piece is sharp and dramatic, with beguiling characters that feel enigmatic, but always able to reveal just enough for their plot to work its magic on the audience. Aside from a couple of unexplained touches like the mysterious appearance of a wheelchair at the start of Act 2, and a bizarre moment involving a red light at the conclusion, Napier shows himself to be a director with an untameable creative flair and a knack for conveying complex, multi-dimensional narratives that could be read in a variety of ways by different viewers. His style is elegant, but brave. There is no hesitation in exploring absurdist territory when appropriate, and a distinct eagerness to tantalize with taboo subjects that really satisfies (except for the unveiling of a disappointingly modest dildo after quite a substantial build up).

Ben O’Toole plays Henry, a young and ambitious insurance salesman in the middle of a living nightmare. The role is comparatively simple, but O’Toole works through it aggressively, with an energy that can only be described as exuberant. His entertaining performance is a necessary contrast to the mysterious and somber quality of the show’s other elements, and the actor leaves a strong impression characterised by excellent commitment and passion. In the role of the very creepy Ernest is Napier himself, who brings experience and an intelligence that keeps us on our toes. His work is efficient, often impactful without needing to push very hard at all, but the performer’s eyes seem to always evade our gaze, rejecting our appetite for the truth in Earnest’s world. The play’s third character is Myra, thoroughly weird and unquestionably mad. Anna Bamford is feisty enough for the part, but her interpretation feels repetitive where we expect extremes coming from all sides. Nevertheless, the unorthodox and precarious sexual atmosphere created by Bamford’s chemistry with her cohorts is an unexpected delight for any theatrical space.

Freak Winds is beautifully designed by a creative team that has addressed every aspect of sight and sound with good taste and sensitivity. Nate Edmondson’s sound design rumbles beneath our feet to taunt us into a space of horror, and along with Alexander Berlage’s lights, the small venue is dissected into a hundred different spots, adventurously explored in all their possibilities. The highly effective set and costumes by Lisa Mimmocchi provide a strong context with immediate visual signifiers that help tell the story almost on a subconscious level, from curtains up to the very bitter end.

Freak Winds‘ macabre comedy mixes with spine-tingling gothic influences and dark erotica to spawn an unusual piece of theatre, yet scary tales seem to have been with humanity since time immemorial, existing in different forms in all our cultures. They remind us of our mortality, and of the arbitrary membrane that keeps us separate from harm. We rely on rules and regulations, laws and legislation, but mostly, we count on the kindness of strangers so that we can live unhindered or protected, but all it takes is one person losing their mind for catastrophe to engulf another, such is the fragility of our existence.