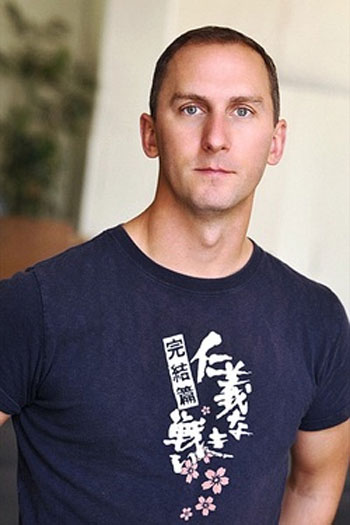 What is your favourite swear word?
Well, I grew up in the States, so “hell” is considered a swear word-it’s blasphemous, you see. So I’ll have to say: God-damned!

What are you wearing?
Now that I’m half-Aussie, R.M. Williams button-down shirt, jeans, and boots, mate.

What is love?
My man-husband and our two beautiful children.

What was the last show you saw, and how many stars do you give it?
Kit Brookman’s Small And Tired at Belvoir amazed and moved me in design, direction, and acting performances. I submitted myself for the role of Electra’s husband, and read the outstanding, mature script back then. But I didn’t get an audition. So four stars. Otherwise five. God-damned Belvoir didn’t give me an audition!

Is your new show going to be any good?
Hell… I mean, heck yes! Both of them. Check out #ButterfliesRFreeAu and #3WintersGreen @kingsttheatre on Twitter to find out what the punters think. Or just me. If I’m the only one using the hashtag. #sob