Theatre review
At the centre of Tony Kushner’s Angels In America, are the breakdown of two relationships, from two different worlds. We might like to term those seemingly separate existences the left and the right, as we are want to do in so much of our political conversations. In the middle of catastrophe however, when the devastation of human frailty becomes palpable, categories dissipate as they prove increasingly impotent and therefore meaningless. Set in the middle of the 1980s AIDS crisis, Angels In America is an ode to desperation, that condition for which the face of humanity has to reveal its truest nature.

In their hopelessness, characters in the story are met with divine intervention. Ghosts, angels and other apparitions descend upon their consciousness, not always as a form of salvation or even reprieve, but as a refusal of the finitude to which we regard life, especially during sickness and disease. Kushner summons the vastness of our mental capacities; call it belief, imagination, or fantasy, to render a theatrical representation of being, that extends our conception of sentience to include metaphysical dimensions.

Not that our bodies are unimportant. In fact, in this deep interrogation of material versus immaterial, we are consumed more than ever, by our very corporeality. Flesh and blood are never far from the centre of our attention, functioning as literal concerns and as symbols, reiterating time and again, that we are immovably both vessel and soul. Heaven and earth are inextricably linked at the location where skin breathes, making us simultaneously, painfully so, sacred and profane.

This transcendental drama is communicated through director Dino Dimitriades’ pursuit of the sublime. The aesthetic world that he manufactures as vehicle for Kushner’s words, is heavy yet delicate, a sentimental embrace of past sacrifices, and a benediction that regards our future, as LGBTQI communities, with caution. At over seven hours long, it is probably inevitable that the journey would feel uneven, with certain portions coming across less powerful than others. It is a massive undertaking, and the considerable confidence with which the epic is approached, sets our expectations very high, and we struggle to overlook moments win which our awe is allowed to falter.

Jeremy Allen’s set design is carefully proportioned and elegantly conceived, but the minimalism of its style is unforgiving of construction imperfections. The colour palette of costumes is thoughtfully calibrated by Maya Keys, who perhaps exercises too much restraint in her visual representation of personalities and their physicality. Lights by Benjamin Brockman are memorable for their dark sensuality, moving us between spaces of despair with an artistic finesse reminiscent of Rembrandt and Caravaggio. Ben Pierpoint is tasked the impossible challenge of providing original music for the endurance piece, understandably deficient in its thoroughness, but sensational at each key juncture of the plot.

The show boasts some extraordinary acting by its indefatigable cast. Mormon wife Harper is played with luxuriant and interminable nuance by Catherine Davies, whose disarming authenticity brings invaluable poignancy to the entire operation. Her husband Joe is interpreted with unexpected tenderness by Gus Murray, tremendously convincing in the complex duplicity that he is charged to portray. The dynamic Ben Gerrard offers up a depiction of a dying man at all his extremes. As Prior, he is more provocative than he is moving, successful at engaging our minds for an intellectual understanding of the story. Ashley Lyons plays another AIDS patient Roy, admirable for the energy and colour that he brings to the stage.

As Belize and Mr. Lies, Joseph Althouse is a scintillating presence, with a marvellous, precise use of voice and gesture that gently steals all of his scenes. Timothy Wardell goes on an emotional roller coaster, able to convey Louis’ passions with aplomb but insufficiently lucid with the role’s philosophical attributes. The Angel is given the Maggie Dence treatment and proves quite the phenomenon, appropriately strong and otherworldly. Jude Gibson impresses in a variety of roles, particularly memorable as Mormon mother Hannah and as Dr. Henry, intricate and humorous with everything she presents.

When we reach for the esoteric, it is a greater truth that we seek, but being mortal, we can only understand its messages within our ultimately insurmountable limits. What we receive will always bear a reflection of ourselves, no matter how much bigger a version we can perceive. Angels In America suggests however, that we can move beyond good and bad, right and wrong, past and present. We are encouraged, through this spiritual fable, to think and act radically, to turn boundaries into starting points, for where we know things to end, is but the beginning of mystery. Much as we are essentially flawed and addicted to destruction, it is in our nature to imagine a higher power, and be able to conjure a notion of purity. The choice whether to follow that celestial magnificence, determines how we paint the destiny of each breath, in all our days. 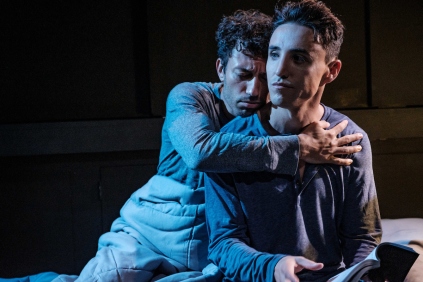 One thought on “Review: Angels In America (Apocalypse Theatre Company)”