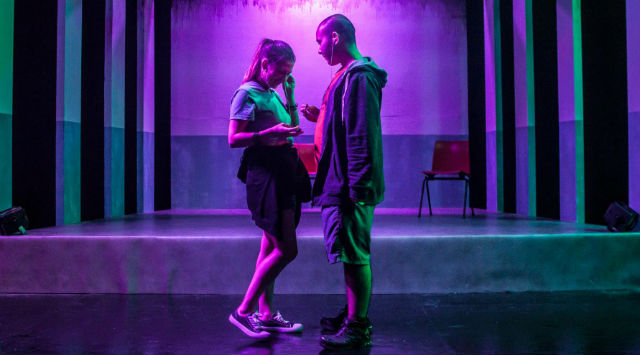 Theatre review
15 year-old Tamara has a talent for writing, but little else besides. Her story in Lachlan Philpott’s Silent Disco, is one of disadvantage and hopelessness. Although living in one of the world’s wealthiest nations, her future as a Millennial Australian is pessimistic. At the mercy of parents and a school system that are broken and desperately failing, we watch Tamara struggle, as her circumstances lead her to a path of ruin. The young rely on our nurturing, but when we offer only neglect and abuse, the inevitable result is destruction.

There is remarkable sophistication in Philpott’s beautifully stylised writing, but the ideas in Silent Disco are simple. Although its characters are dynamic, and the relationships between them are intriguing, Johann Walraven’s restrained direction provides only minimal dramatic tension, offering instead an unyielding sense of naturalistic authenticity to its melancholic situations. Set design by Ester Karuso-Thurn is visually arresting, but activity feels distant, in a vast space that requires a less understated approach. Jessica Dunn’s work as sound designer is refreshing, and her inventive compositions help enliven proceedings.

Actor Gemma Scoble is a convincing Tamara, looking and sounding every bit the rebellious school girl on all of our suburban high streets. Her portrayal of the wilful teen is certainly accurate, but a greater sense of theatricality would allow us to engage better with her experiences. Tamara’s boyfriend Squid, is played by Badaidilaga Maftuh-Flynn, appealing with the emotional nuances he very effectively conveys, and Leilani Loau’s performance as a compassionate teacher is quiet but powerful, and vitally thought-provoking.

We disapprove of any parent less than responsible and competent, but we routinely allow our community organisations to falter. Tamara’s parents are deeply disappointing and probably unforgivable, but their human flaws are understandable. As a nation that boasts of so much, our failure to protect each other should be even more reprehensible, but the ease with which we turn a blind eye, is appalling. In becoming increasingly individualistic, society turns neglectful. It is as though we have stopped thinking of the weak as deserving of care, and have begun regarding them as dispensable and contemptible.