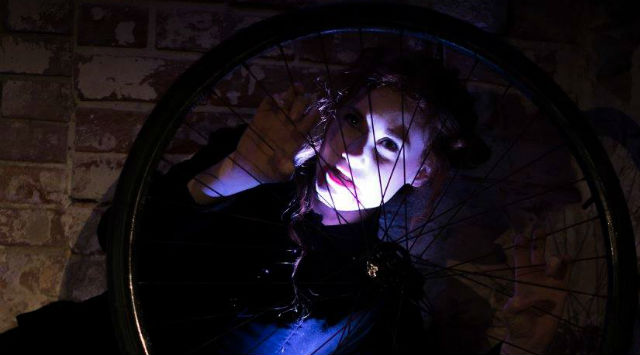 Theatre review
It is one woman against the world in Danielle Baynes’ Bicycle. The odds are stacked against our 19th century protagonist as she discovers not only her life’s passion, but also the injustices that women face when trying to carve out a self-determined existence. Coming of age in Baynes’ play means realising the discrimination that is systematically entrenched in a world that had previously seemed innocent. An awakening of desires demands that her eyes are open to truths, and her story of tragic enlightenment is told in a way that disallows us from denying its persisting relevance. The nameless Lady’s feelings and experiences, her perspective of the world, and her hunger for what is right, all find connection with our 21st century sensibilities, and shock us into seeing the intimate parallels between what we had considered to be bygone history and what we continue to retain. It is a passionate piece of writing, insightful and brilliantly elucidating through a narrative that is at once personal and universal. At the core of its many colourful permutations of form, is its unmistakeable feminist advocacy that many will find irresistibly inspiring.

Baynes plays the Lady in the hour-long monologue, with Pip Dracakis providing an added female omnipresence with her person and violin. Space is restrictive, and the production relies squarely on the leading lady’s ability to keep our attention and imagination engaged, which she accomplishes remarkably well. Scenes are thoughtfully demarcated and given distinct flavour by director Michael Dean, but some sequences are more effective than others, resulting in a plot trajectory that can feel uneven in its resonance. Dracakis’ live music gives the show a dynamism that works seamlessly alongside Baynes’ actorly endeavours for a powerful statement about art, and the struggles in its creation.

Sex and art are linked in Bicycle, both are appetites ferocious in nature and indomitable. The Lady’s liberties are completely usurped by a patriarchy that is determined to diminish her wishes and talents. We live in a world where powerful people go to great lengths to maintain the status quo, for their position necessitates the subjugation of many. This seems to be part of human nature, never to change, but processes where disenfranchised groups work to destabilise and subvert oppressive forces are always ongoing. Not all will succeed, but the battle continues for the human spirit is at its most potent when the downtrodden are left with nothing else to lose. Her rights as a sexual being and an artist, are a threat to her father and his conspirators, who do all they can to disempower her, but we are glad to see her fight to the end, whether or not she comes out on top.